The Witches’ Stones Book 3: Revenge of the Catspaw, Free on Amazon


The Witches’ Stones Book 3: Revenge of the Catspaw, Free on Amazon

This week, Oct 31 to Nov 4 2018, “The Witches’ Stones Book 3: Revenge of the Catspaw” is free on Amazon.
So, go on a free romantic science fiction adventure with Terran Confederation agents Sarah Mackenzie and Coryn Leigh as they attack their enemy head-on, on its home planet, in order to preserve the peace of the galaxy and their own romantic relationship. 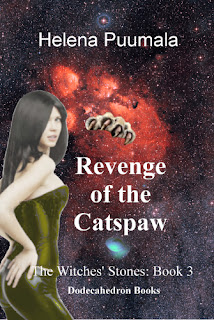 In this, the third and final book of The Witches' Stones saga, the attractive part human-part Kordean Witch psychic Sarah Mackenzie and the handsome Terran Confederation agent Coryn Leigh face some profound dangers and challenges, some personal and some that span the galaxy.
As the book opens, Sarah and Coryn pledge their love in a Kordean marriage ceremony. That ceremony contains both a blessing and a curse, and the ultimate working out of that blessing and curse will prove instrumental in resolving both of their fates.
Coryn finds himself a prisoner of the corrupt Elites of The Organization, the people who call themselves the Neotsarians, an authoritarian empire whose rulers consider themselves the natural overlords of the Milky Way galaxy. He becomes a “catspaw”, bait to lure Sarah into their hands, in their continuing quest to use her psychic powers to augment a deadly super-weapon, one that is capable of ensuring that they can rule the galaxy. Against his will, he also becomes the plaything of “Evil Evilla Copoz”, perhaps the most unsavoury of the Neotsarian elites.
In the first book of the trilogy, Coryn has to rescue Sarah from a terrible fate. This time, it is Sarah who must try to save him from Evil Evilla, while avoiding falling into the trap that the Neotsarians have set for her. She, along with a group of willing, adventurous associates, must infiltrate Neotsarian space in order to attempt a spectacular rescue, not just of Coryn, but of others who have been enslaved even as he has been. The Blessing and Curse hang over all of the characters in the story, with a twist that truly reflects the “revenge of the Catspaw”, in all of its multiple meanings.
Beyond the pure adventure story, is a deeply emotional story of love and recovery. Coryn and Sarah must undergo trials both physical and psychological, in order to keep their love alive through the most appalling of circumstances and the most harrowing of memories. Fortunately, they have the power of the Blessing and the Curse to help them through the ordeal, as well as their own very considerable inner strengths.
The novel is about 115,000 words, about 8 to 10 hours reading at typical reading speeds. It is the final book of the trilogy, at least for now, although writer Helena Puumala has “kept the door open” to perhaps pursue new adventures in Sarah and Coryn's universe at a later date.
Posted by Dale Olausen at 19:19 No comments:

Kati of Terra Book 3: Showdown on the Planet of the Slavers Free on Amazon this Week


Kati of Terra Book 3 – Free on Amazon this Week

So, go on a romantic adventure with our gal Kati of Terra and her romantic companion Mikal (and, of course, Kati’s ever helpful but somewhat psychopathic Granda node), as they endeavour to crush the galactic slaver ring that originally ensnared Kati, as well as the slaver’s evil partner in crime, the aptly named Krush. 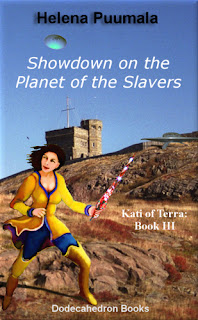 Kati of Terra: Book Three – Showdown on the Planet of the Slavers

Kati of Terra and Star Federation Agent Mikal R’ma Trodden join forces with the beautiful female reptilian, Xoraya, and the young Tarangayan mathematics and engineering genius, Lank, to chase down the Slaver Gorsh and bring him to justice. The evil Waywardian Gorsh was responsible for Kati’s abduction from Earth, along with numerous other victims from many other worlds; among these were many small children from Earth and other planets.

Their quest begins on an obscure Fringe Space Station which houses a reputable used space ship yard, the services of which they need if they are to journey along the Space Trade Lanes. Odd and dangerous events start to shadow them while they are on the Space Station, Qupar, and never really cease during the course of their mission. It begins to look like there is much more at stake than merely bringing to justice a slaver, and rescuing the people he has enslaved and sold - an unnatural and unspeakable evil of cosmic proportions may well be at the center of events.

The group gains new members, even while it loses Mikal and Xoraya into Gorsh’s hands - Kati and Mikal are once again separated, and have to struggle to perform their tasks apart from one another. However, neither of them is a quitter; they are resourceful and in love, so no force in the universe can keep them separated for long. The manner in which they and their allies overcome the obstacles that they face makes for an exciting, amusing, and romantic tale
.
This is the thrilling conclusion to the dramatic story which began in Escape from the Drowned Planet, and continued in On Assignment to the Planet of the Exalted. Kati and Mikal can now take a breather from adventure - or can they? Time will tell.

This is a full-length novel of about 260,000 words (equivalent to a paperback of about 550 pages). Please note that the Kati of Terra novels are written so that they can be read as stand-alone books, so Kati of Terra Book 3 can be enjoyed by readers who have not yet read Kati of Terra Book 1 or Book 2. Naturally, we encourage people to read the entire trilogy to experience all the adventure and romance of the Kati of Terra series.
Posted by Dale Olausen at 18:46 No comments:

Free on Amazon: The Witches’ Stones Book 2: Love and Intrigue Under the Seven Moons of Kordea


Free on Amazon: The Witches’ Stones Book 2: Love and Intrigue Under the Seven Moons of Kordea

This week, Oct 24 to 29 2018, “The Witches’ Stones Book 2: Love and Intrigue Under the Seven Moons of Kordea” is free on Amazon.
So, go on a free romantic science fiction adventure with Terran Confederation agents Sarah Mackenzie and Coryn Leigh as they grapple with the forces of Earth’s galactic rival, The Organization, as well as their own growing attraction for each other. 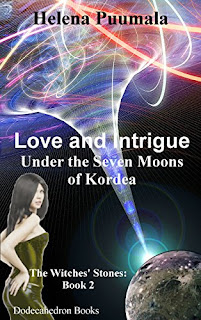 The feisty, ESP-talented Earth woman Sara Mackenzie has arrived on the anomalous planet Kordea to take up studies in Witch-lore, among the race of wise women on that planet, known as the Circle Witches of Kordea. The Terra Confederation Agent, Coryn Leigh, who helped her to escape the clutches of the authoritarian enemies of the democratic Terra Confederation, has also arrived on Kordea, taking on the diplomatic posting of the Kordean-Terran Liaison Officer. His duties include helping the Witches to keep Sarah and the cache of ESP-enhancing gems known as amartos, or Witches' Stones, safe from their enemy’s hands. That adversary, known sometimes as The Organization, will stop at nothing in their attempts to grab the Stones and an ESP-capable human, in order to gain the ultimate power with which to take over the inhabited galaxy.

It is not long before the planet Kordea comes under attack. The Organization turns their latest weapon upon the planet and its unusual moon, Lina. That moon is nearly wrested out of its orbit - only the emergency interventions of Sarah and her colleagues can prevent planet-wide catastrophe.

It becomes clear that Sarah, Coryn, and others, including the Witches of Kordea, must undertake a risky project involving an undercover mission to destroy this threatening super-weapon, in order to safeguard Kordea and the peace of the galaxy.

At the same time Sarah and Coryn have to deal with their growing attraction to one another. Coryn is in a conflict-of-interest position, since he has taken on a guardianship role toward Sarah, necessitated by his new, diplomatic position. Sarah, on her part, must struggle with self-doubts: about her looks, her worth, even her identity—although not about her ESP abilities, which are considerable. They must struggle with their personal dilemmas, even while trying to counter the enormous threat to the democratic way of life of the humanity of the galaxy.
Posted by Dale Olausen at 10:02 No comments: