Europa Update 2, June 2017 : NASA has recently begun seeking proposals for experiments that will be carried on a proposed mission to Jupiter’s moon Europa.

As outlined in an earlier blog (reproduced below), Europa is considered to be one of the best targets in the search for life, in our solar system.  That’s due to the vast ocean that is assumed to exist under the layer of ice that exists on the surface (and, from which that surface is composed).

According to a BBC report, the pair of proposed missions has now secured support in Congress – it isn’t clear if that is actual money or goodwill, from the article, though.  At any rate, there is funding to begin the search for ideas about experiments and how to develop the instrumentation for those experiments. 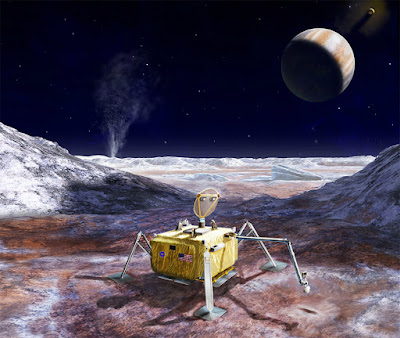 The first objective, of course, is to actually place a lander on the surface of Europa and start looking and digging.  Eventually, some sort of mission to the subsurface ocean would be the ultimate goal, though that might take some time.  At the moment, we don’t even know how thick that ice is, or whether the ocean comes close to the surface at some points.  However, since there does seem to be water plumes coming from below, as well as chaotic regions of ice on the surface, it seems clear the ocean must “outcrop” on the surface at some times and places. 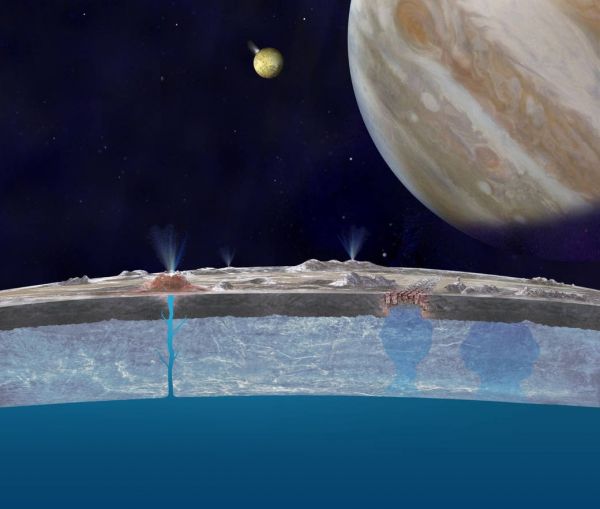 The call-out for ideas has been made.  Science teams are asked to put together proposals, which will then be evaluated and will move on to a next step, for more detailed work.  About ten ideas are assumed to go forward.

Basically, NASA wants to land a craft on Europa, that would first hunt for signs of microbial life on the surface.  It would use the “sky crane” idea, which was used for the landing of the rover “Curiosity” on Mars.  That was a fairly incredible, and quite harrowing feat.  One can only imagine that landing on a much colder, more distant world will be even more challenging (and exciting). 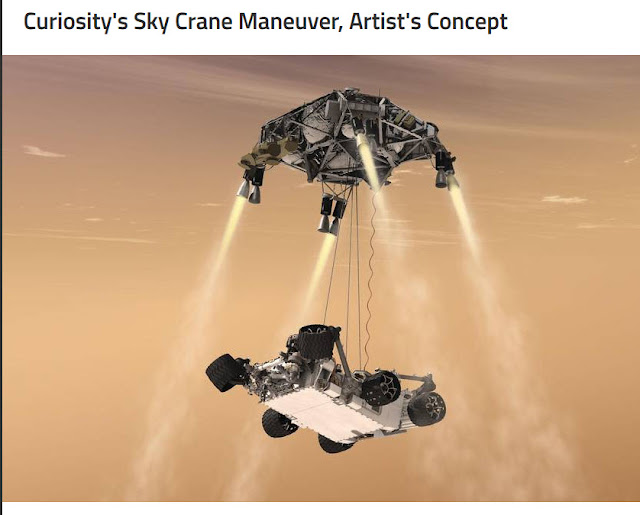 The lander will carry various cutting tools, in order to break up surface.  A motorized rasp was used by a previous lander, again on Mars.  That idea will also be used on Europa, though my understanding is that ice at the temperatures that one would find on Europa is very hard stuff, not much different than steel.  But, perhaps the top-most layer of ice will be more workable, as it has been exposed to the radiation bombardment created by Jupiter’s intense magnetic field interacting with the solar wind, as well as micrometeorites.

NASA also proposes using a counter-rotating saw.  Apparently that is a saw with two blades, spinning in opposite directions, which helps to eliminate the “kickback” and binding that can happen while cutting hard material (as anyone who has hit a really solid knothole while cutting through wood with a power saw can attest).

A seismometer is also likely to be included – that would help to define the properties of the sub-surface, such as how deep the ice is, before the ocean begins, and whether there are “lakes” within the ice, that help to channel water to the surface.  Naturally, that device will have to be miniaturized and designed in such a way that human intervention isn’t needed to place it nicely on a flat surface.

Though the ultimate source of life is likely to be deep below the ice, in the sub-surface ocean, NASA hopes that evidence for life might be found on the surface.  Traces of life could have been upwelled from below (as indicated by the chaotic regions of ice) or carried by water plumes high above the planet, to fall back to the surface.  Ideally, that evidence would be microbial cells or cell fragments, though traces of chemicals that are associated with bio-chemistry might also be very persuasive.

Unfortunately, this mission is still a decade or more in the future.  A flyby of Europa, currently called “Europa Clipper” is supposed to launch in the early 2020’s, so that will have to suffice until then.

Note: the water plumes have been show below, after much data processing by the discoverers, to isolate and highlight them from the background (e.g. look at the "south pole" area). 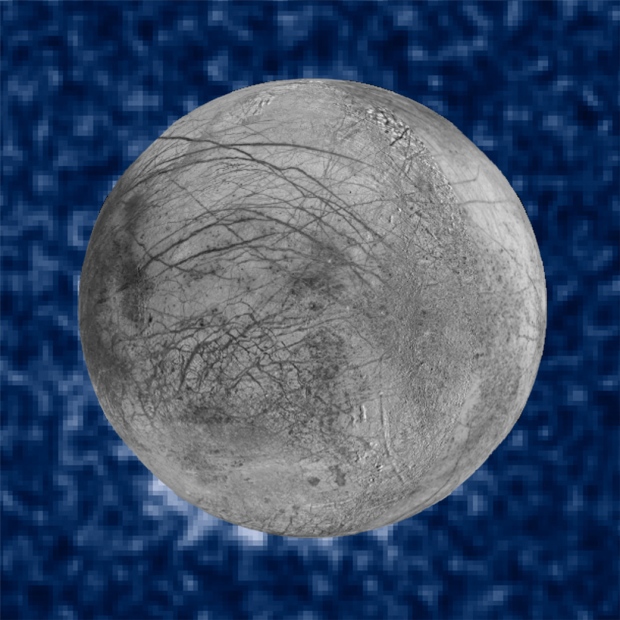 
Helena Puumala’s SF Romance series features a planet with seven moons.  This rather unusual setting gives me the opportunity to talk about some of the remarkable moons in our solar system, as I test different moons for the cover of book 2 of the series.

But, more on that at the end of the blog.  Basically, the book gives me the opportunity to do a mini-tour of some of the major moons of our solar system.

This blog is about Europa, one of the four large moons of Jupiter, and one of the most interesting, as there is intense speculation that it could harbor life in its deep ocean.

Here are a few facts about Europa, courtesy of Wiki:

Here's a picture of Europa,  taken by a NASA probe. 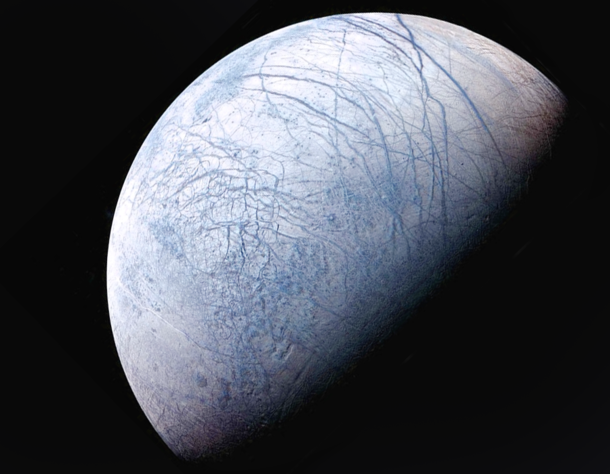 Here's a recent picture of Europa and some other moons, taken by NASA's Juno probe, on July 5, 2016.  Granted, the moons are pretty small, but this is the first reasonably close-in picture from the new Juno probe.  Hopefully, we will get some more interesting photos of Jupiter’s moons, though I believe the probe’s science mission is mostly focussed on Jupiter itself, the atmosphere in particular. Now that you have read some science, you should think about reading some Science Fiction, like the series described below.  It's easier to keep blogging, when people also buy the books that you publish. :)

In fact, the moons of Kordea are a central element in Book 2.  The cover below actually borrows the moon Europa, one of the moons of Jupiter 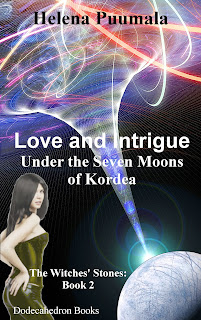 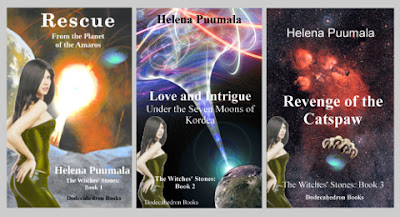 Sarah has taken refuge on the planet of Kordea, where she is also learning how to control her psychic abilities, through the tutelage of the Witches of Kordea.  Coryn Leigh has now taken up the position of Confederation diplomat to the Kordeans, but he is also charged with keeping the Mackenzie girl safe at all costs.  During their time on the planet, an attraction between them grows, though they try to deny it, to themselves and each other.
But The Organization has plans of its own, including threatening the destruction of the planet Kordea, via destabalizing the orbit of Lina, one of its many moons.  The Organization proves that its threats are in deadly earnest, so, ultimately Sarah, Coryn and the Witches of Kordea must take the fight to the enemy.  Thus is borne a dangerous mission, to  a planet where their foe has based the weapon that threatens Kordea, and ultimately, the balance of power throughout the galaxy.  Sarah and Coryn agree that the machine must be destroyed, even at the possible cost of their own lives and growing love.

The Witches' Stones, Book 3 - Revenge of the Catspaw

Sarah and Coryn have become married, under the traditions of the Witches of Kordea.  But the marriage is performed by the Eldest of the most important coven, a rare honour, that comes with a blessing and a curse.  The slow working out of this blessing and curse forms the backdrop to the story.

Posted by Dale Olausen at 12:13 No comments:

It's May, which is a great time for a road trip.  But, if you can’t get away, just yet, you can read about a nice road trip across western North America, with “On the Road with Bronco Billy”.  Sit back and go on a ten day trucking trip in a big rig, from Alberta to Texas, and back again.  Explore the countryside, learn some trucking lingo, and observe the shifting cultural norms across this great continent. 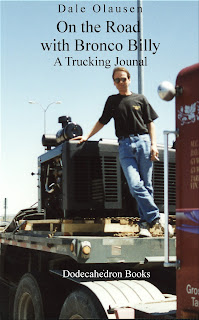 Note: These reviews are from Amazon.UK. 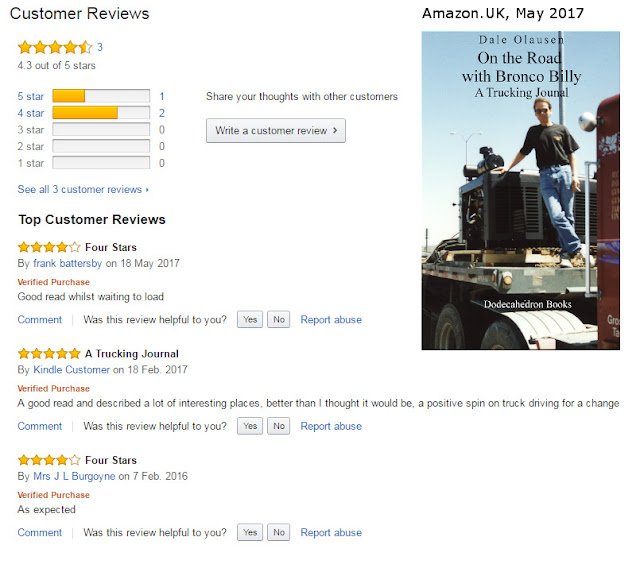 Here’s the summary:
=======================================================
What follows is an account of a ten day journey through western North America during a working trip, delivering lumber from Edmonton Alberta to Dallas Texas, and returning with oilfield equipment. The writer had the opportunity to accompany a friend who is a professional truck driver, which he eagerly accepted. He works as a statistician for the University of Alberta, and is therefore is generally confined to desk, chair, and computer. The chance to see the world from the cab of a truck, and be immersed in the truck driving culture was intriguing. In early May 1997 they hit the road.

Some time has passed since this journal was written and many things have changed since the late 1990’s. That renders the journey as not just a geographical one, but also a historical account, which I think only increases its interest.

We were fortunate to have an eventful trip - a mechanical breakdown, a near miss from a tornado, and a large-scale flood were among these events. But even without these turns of fate, the drama of the landscape, the close-up view of the trucking lifestyle, and the opportunity to observe the cultural habits of a wide swath of western North America would have been sufficient to fill up an interesting journal.