Lunar Eclipse with An iPad

Here are some lunar eclipse photos from Sept 27, taken from my iPad.  The regular camera battery died at a most inopportune time, so I had to depend on the iPad.  But iPad astrophotography is an art in and of itself.

The diagrams of the Earth's shadow, moon, and timing of the eclipse are from the website:
http://www.timeanddate.com/eclipse/in/canada/edmonton

You can experiment on this site, for other eclipse dates and locations.  It's fun.

At 8:47, nearly dead center of totality.  The moon barely came through in the iPad photo, needed a fair bit of brightness and contrast pushing: 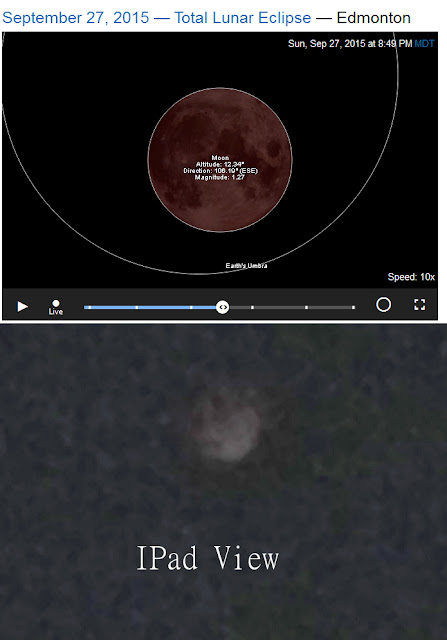 At 9:07, still in totality but moving towards the edge of the Earth's shadow.  Moon is brighter, but still very red.: 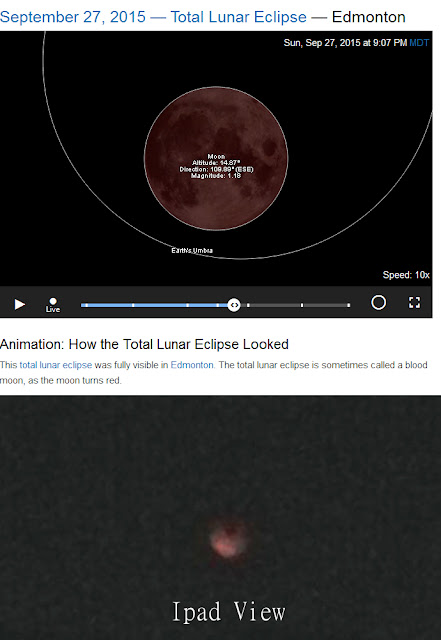 At 9:18, almost out of the Earth's shadow, very close to the edge.  Moon is brighter, now seeing a bit of brighter light on the edge of the moon.: 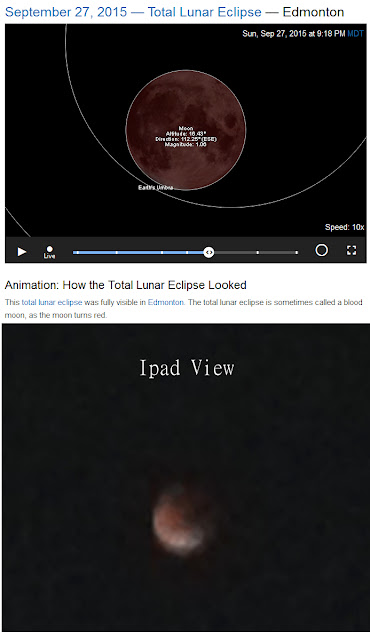 At 9:24, moon just broke out of the Earth's shadow, now see "dawn" breaking on the side of the moon: 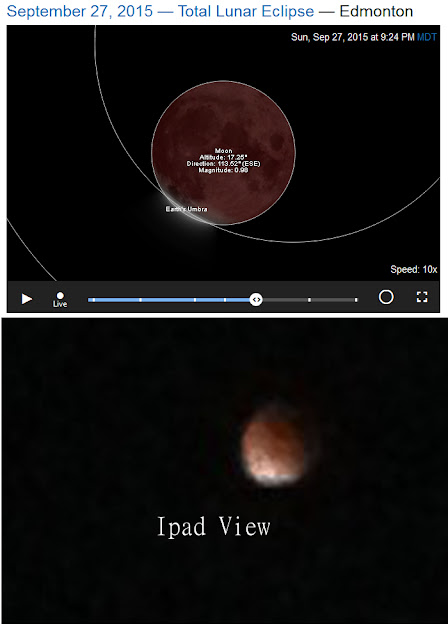 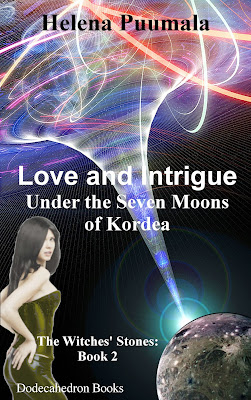 Posted by Dale Olausen at 16:59 No comments:

In a blog from a short while ago, we talked to writer Helena Puumala (Kati of Terra Series and Witches’ Stones series) about her opinion of the value of the English Degree, as a preparation for writing the novel (her B.A. was in English with a minor in History).  Her overall summary: “As degrees go, it’s as good as any and maybe better than most.”

This raises the question of just what do most successful writers do, to prepare for a writing career.  Well, we can’t answer that, but we can get a sense of what subjects the writers in the Amazon Top 100 of 2013 and 2014 studied at university, for those that took that route.

First, a couple of notes on the data:

The dataset was constructed from publicly available data, using Amazon’s “Top 100 Books” of 2013 and 2014.  Those are the top selling books that were published in the respective years, as determined by Amazon’s algorithms.  We don’t know the details of those algorithms, but we have to assume that they correlate to some reasonable measure of “most books sold”.   This data was supplemented by data on the Amazon Author Pages, the authors’ web sites or google searches related to the authors.  Basically, though, it is all in the public domain.

There were 200 books in the “Amazon Top 100” over the two years 2013 and 2014, written by 123 writers in all (some writers had more than one book in the dataset).  In the analyses that follow, I used books rather than writers as my unit of analysis, so writers who had multiple successful books are weighted higher than those with fewer books.  That seems fair, since we are looking at factors that correlate with writer success, so a more successful writer should be given greater weight in the analysis.

As we noted in an earlier blog, regarding the educational status of writers in the Amazon Top 100, the majority did identify that they had a university degree, though a substantial minority either identified no degree or didn’t say in any public record that I could locate.  As the graph below shows, about 25% of writers didn’t identify their educational status, while about 15% had some level lower than university completion (since there are 200 books in the dataset, divide the numbers on the top of the bar graphs to come up with a percentage). 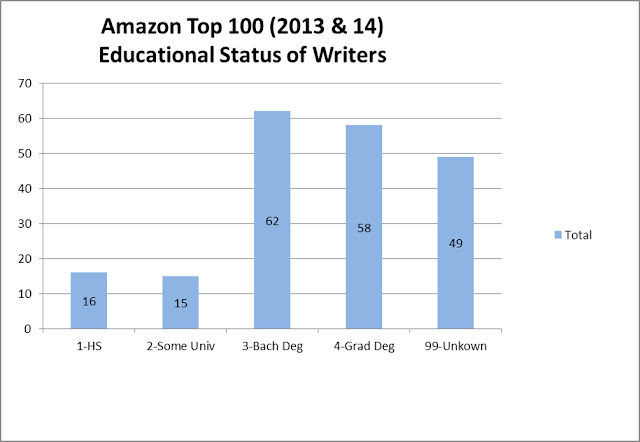 For just under 60% of writers in the Amazon Top 100, it was possible to determine their major subject of study.   I have done a bit of aggregating of subjects into groups that seemed to have common themes (e.g. English/Journalism/History and Medicine/Nursing/Counselling, to reduce the number of categories to a manageable size.  Note that “Other” included:  Religion,  Art, Engineering, Psychology, and Economics.

After “Unknown”, the biggest category was “English/Journalism/History”, followed by Law.  So, for this group of writers, the English degree and its close cousins Journalism and History were still the most common educational background.  Those two groups accounted for 64% of all writers whose subject of study was known. 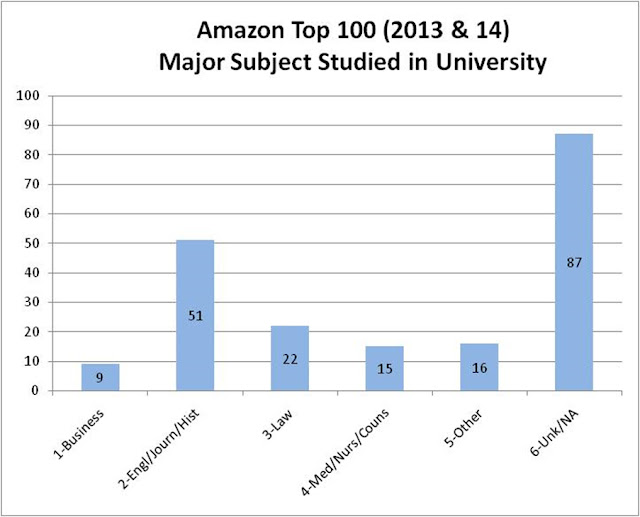 Interestingly, though the “Unknowns” skew slightly to the lower selling quartile 4 books, that effect is not particularly strong.  Many of the books in the top half of the list were written by authors whose major area of study is unknown. 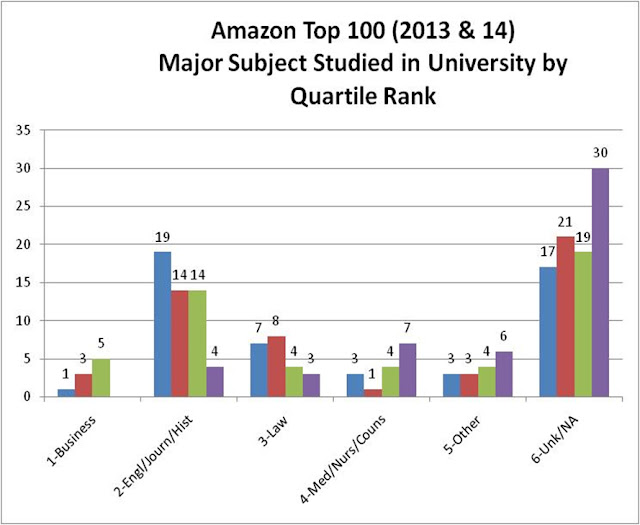 4 – Major Subject of Study by Gender

The most striking result here, is the much greater tendency of female writers to be in the “Unknown” category, in terms of their major area of study, than their male counterparts.  This is true of educational status in general, and correlates highly with the tendency of Romance authors to not readily disclose this information.  Since Romance writers are predominantly female, this leads to the gender differences seen in the chart.

After excluding unknowns, there was a tendency for male writers to have a background in "English/Journalism/History", while female writers were more likely to dominate the "Medicine/Nursing/Counselling" group.  They also dominated "Business" and “Other”.  Law was evenly split. 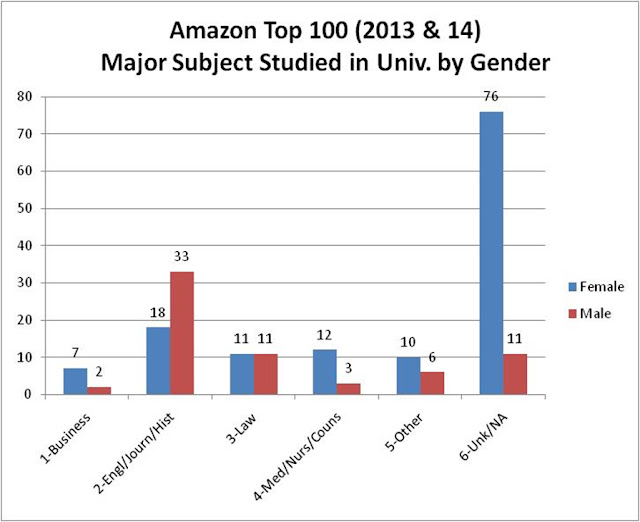 The most notable result is distinct tendency of the English/Journalism/History group to be in the 65 Plus age range.  It is also of note that the “Unknown” group tended to skew younger.  The other subject areas had no particularly strong age trends. 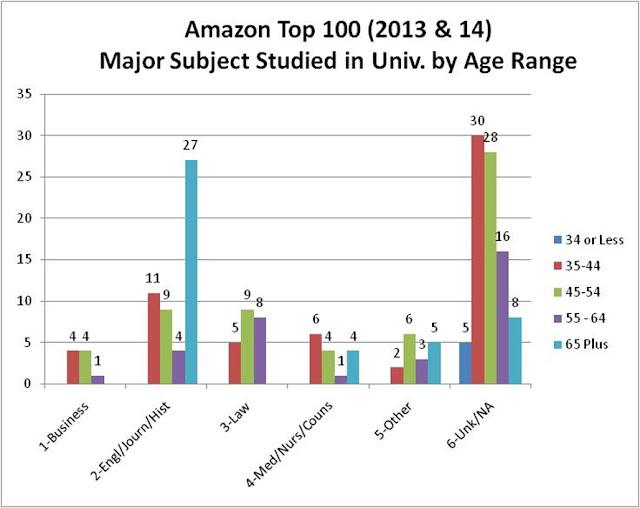 As the graph shows, writers of books published by both traditional (Trad) and independent (Indie) publishers, sometimes had “Unknown” major subject of study backgrounds, though the Indie group had a higher proportion of these.   After accounting for unknowns, the Trad group predominantly came from backgrounds in English/Journalism/History or Law.  The Indies were fairly evenly split, with no strong tendency.  Smaller Trad publishers (BPH-S) were less dominated by English/Journalism/History backgrounds than were the big Trad publishing houses (BPH). 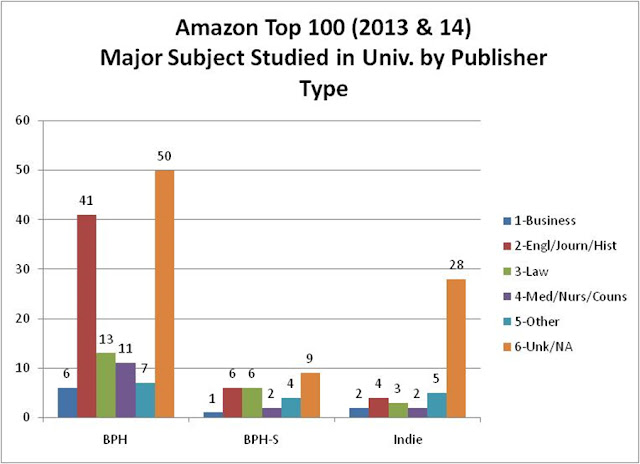 As the graph shows, writers of the lower priced books were more likely to have “Unknown” major study backgrounds.  However, a substantial number of books in the higher price ranges also were written by writers with unknown educational backgrounds. 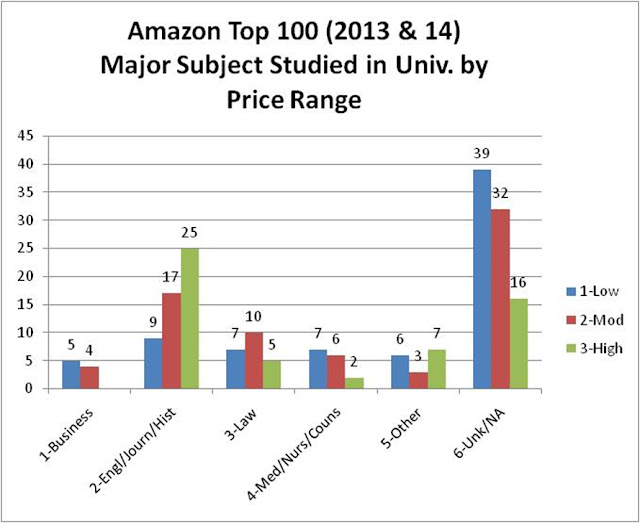 8 – Major Subject of Study by Genre

As noted earlier, Romance writers make up the vast majority of the “Unknowns”, in terms of educational background.  Being non-disclosive on this subject seems to be a norm of the genre, perhaps because emotional intelligence is such a significant contributor to success in this genre, and that is not well captured by educational background.  Indeed, Romance readers might be somewhat chary of reading books by writers who make a point of mentioning their academic credentials and major area of study.

It is interesting that the Literary Fiction genre had more writers in the “Unknown” subject area background than in English/Journalism/History.  The same was true for Science Fiction/Fantasy. 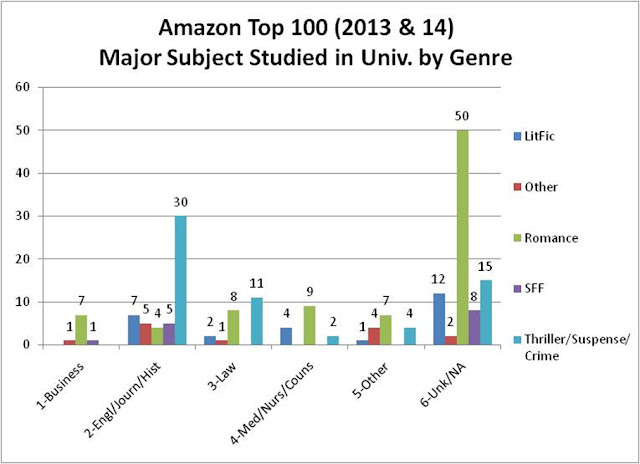 ·         For about 60% of writers, it was possible to determine what subjects they studied at university.  Though the “English/Journalism/History” background was the most common, over half of these writers had some other major while at university, with Law placing second.

·         The writers in the English/Journalism/History and Law groups tended to dominate the highest selling quartiles of the list.

·         Female writers were far more likely to have “Unknown” educational backgrounds than males.  For those whose background was known, males tended to be a higher proportion of the English/Journalism/History group, while females tended to predominate in the Medicine/Nursing/Counselling group.

·         The “Unknown” group had a higher proportion of younger writers.  The English/Journalism/History group tended to skew to the older age groups.

·         The “Unknown” group was disproportionately from the Indie publisher world, though a substantial number of Trads also had unknown educational backgrounds.  In the big publishing houses, over half of the writers whose backgrounds were known, had an English/Journalism/History credential.  Indies and smaller Trads did not show any strong patterns, as far as those writers with known backgrounds were concerned.

·         The highest priced top sellers tended to be written by authors with English/Journalism/History and Law backgrounds.  Almost undoubtedly, then, these were the highest paid writers in the Amazon Top 100 (highest ranking and highest priced books).

The overall sense that one gets from the data is that the old guard of the highest ranks of traditional publishing were primarily drawn from the ranks of the English/Journalism/History majors, with Law also being significant.  These writers tend to be older and are more likely male.  They still sell well, and command high prices.  They tend to write in the Thriller/Suspense/ Crime genre.

Basically, Indie publishing appears to be effectively opening the door to people with non-standard backgrounds, in many ways.  It would seem that big publishing developed a norm of preferring the “English major”, which is perhaps not surprising.  Intuitively, it seems like the educational background most suitable for a successful writer.   But as the Indie world is showing, that may have been circular reasoning on the part of the traditional publishing industry.   Successful Indies seem to be coming from a great variety of backgrounds, and to be a successful Indie means, above all, to be accepted by readers, the ultimate judges of the profession. 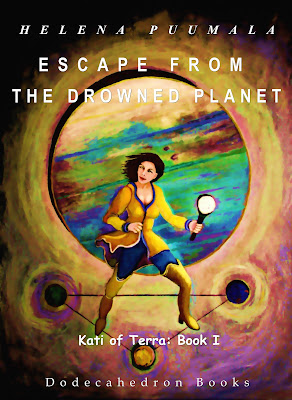 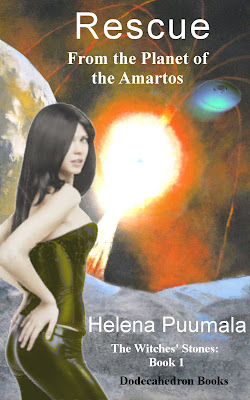 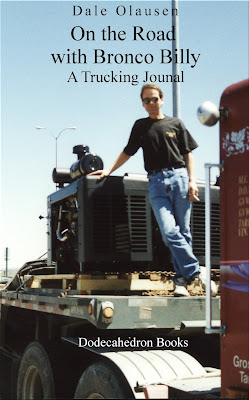 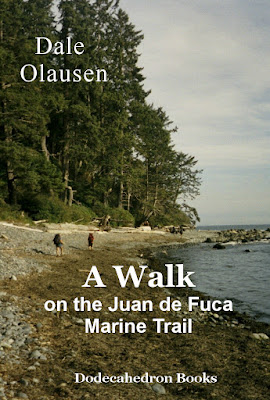 Posted by Dale Olausen at 16:44 No comments: