Helena Puumala’s SF Romance series features a planet, Kordea, with seven moons.  This rather unusual setting gives me the opportunity to talk about some of the remarkable moons in our solar system, as I test different moons for the cover of book 2 of the series (link given below).  This blog is about the larger moon of Pluto, Charon, which has recently been visited by a spacecraft for the first time.  It is by far the largest of Pluto’s five moons.  In fact, it is sufficiently large compared to Pluto, that the two bodies orbit a common center of mass that is not within Pluto itself.  In that sense, they can sometimes be considered a double planet system.

The Witches’ Stones Book 2: Love and Intrigue under the Seven Moons of Kordea.

Here are a few facts about Pluto’s moon, Charon, courtesy of Wiki and NASA, via the recent NASA spacecraft New Horizons:

Here's a nice shot of Charon, taken by the New Horizons spacecraft in July 2015, during the fly-by. 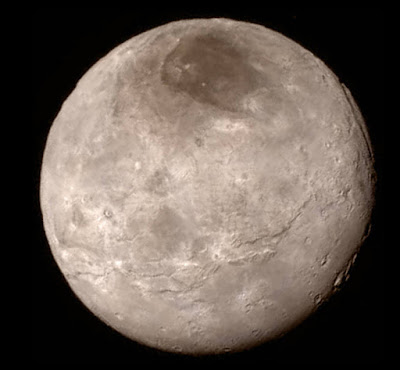 Helena Puumala's SF Romance series features the planet Kordea, home to a race of beautiful and powerful psychic aliens, known as the Witches of Kordea.  The planet has seven moons, an extraordinary arrangement for a terrestrial sized planet in its star's habitable zone, as is noted in Book 1, which you can get from the link below:    :).

In fact, the moons of Kordea become a central element in Book 2, now out as well.  The cover below actually borrows Pluto’s moon Charon.  I have been testing out different moons for the cover of the Witches' Stones Book 2, so, as noted above, this gives me the opportunity to do a mini-tour of some of the major moons of our solar system.  Moons, including our own, are fascinating.  A terrestrial planet with seven moons would be cool (though it would probably be a very unstable arrangement). 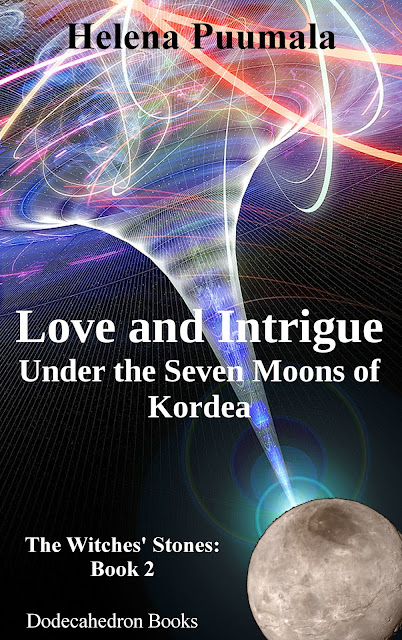 Posted by Dale Olausen at 16:07 No comments:

Maybe it's just me, but I see a fairly remarkable resemblance between this false colour image of Pluto, and the view of Earth from space, particularly the tan coloured area in the upper part of Pluto (above the heart) and the shape of North America in the picture of the Earth. I see a similar "Mexico", "Gulf of Mexico", "Florida Panhandle", east coast of the U.S., a hint of Canadian arctic islands in the far north.  Plus, the blue parts of Pluto remind one of the ocean on Earth.

Maybe just a coincidence, or perhaps the person doing the false colour assignments was subconsciously choosing a colour scheme that gives this impression. 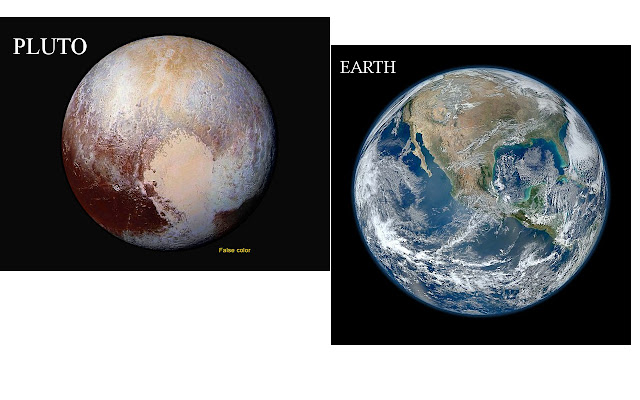 Posted by Dale Olausen at 12:03 No comments:

Free this weekend on Amazon: Helena Puumala's "A Mid-Summer Morning's Dream at the Lake"

Helena Puumala's "A Mid-Summer Morning's Dream at the Lake", is free this weekend on Amazon

Here is another wonderful story by writer Helena Puumala, one of her warm, emotional “at the Lake” stories. It is a sequel to “Love at the Lake”, which involved the consequences of marital infidelity, real and imagined, within the relationships of two young couples.

What happens next? Can love be recovered after thoughtless betrayal? Perhaps, but only with a little help from a mysterious dark haired woman, in this modern-day spin of a fairy tale for adults.

This is a short story, of about 9000 words, suitable to be read in about 45 minutes to an hour, by a typical reader.
The regular price is 99 cents, but this weekend (Fri July 24 to Sunday July 26) it will be free to download on Amazon. 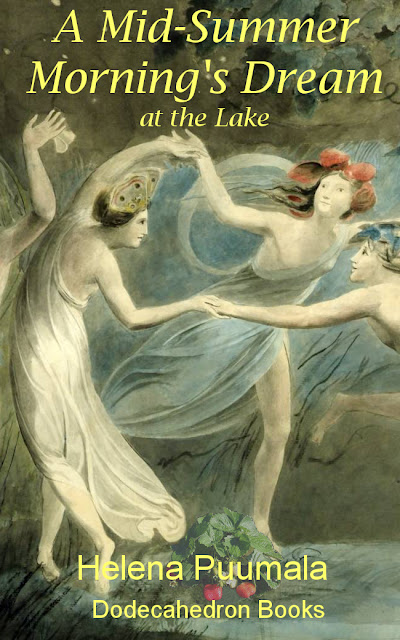 Posted by Dale Olausen at 05:11 No comments:

Are Barnes and Noble, Chapters Indigo and the Big Five Publishers “Value Traps”?

Are Barnes and Noble, Chapters Indigo and the Big Five Publishers “Value Traps”?

A recent column in the Globe and Mail Report on Business by George Athanassakos (a business professor at the University of Western Ontario) discussed the concept of the “value trap”.  I found it quite fascinating, especially as it relates to the book publishing and book selling business.  The question comes to mind, are the big legacy companies in the industry “value traps”?
According to the professor, “a value trap is a stock that looks like a bargain, based on key valuation metrics such as price-to-earnings or price-to-book ratios, but it falls further in price and fails to recover within a value investor’s investment horizon of three to five years, and at worst goes bankrupt…”.  He goes on to explain that the main reason that such companies are dangerous to investors, is that the underlying changes that threaten them are not business-cycle related (e.g. weathering a recession), but rather secular, structural and mostly permanent.  That’s business jargon:
·         Secular – a steady change over time, rather than cyclical (usually either growth or decline).
·         Structural – something is going on that is fundamentally changing the activity.
·         Permanent – the old way of doing things is not likely to be coming back.
Here are some of the key things he says to watch for, to spot a value trap:

1 - A company with poor management, particularly if it operates in a market with low barriers to entry.

Low barriers to entry means that competitors can set up in business relatively cheaply.  That certainly seems to apply to the current book market, both publishing and selling.  With e-books, publishing and marketing to a large segment of the reader market is now easy and has very low barriers to entry.  Physical bookstores are still a barrier for Indies (except print on demand via Amazon and other internet sites), as it is difficult to break into that market – traditional publishers pretty much have a lock on that.  But as time goes on, fewer and fewer people rely on bricks and mortar stores, so that advantage is declining for publishers and bookstores alike.
He goes on to say that poor management includes “managers who lack industry experience and relevant background”.  That could clearly be said of Barnes and Nobles latest CEO, who comes from outside the book world, though he may help them to transition to a largely non-book retailer.
He also mentions “managers who believe that all problems are temporary”.  The constant refrain from both publishers and bookstores that ebook growth is slowing or even stalling out is an prime example of this phenomenon.   Here’s Chapters/Indigo CEO Heather Riesman’s latest remarks on the subject (Financial Post, May 5, 2015):

After several years of paring square footage, Indigo is planning new stores in Vancouver and Toronto and will double warehouse capacity to make room to sell more books and goods online.
“We see people changing their behaviour,” Reisman said. “People who were reading 80 per cent digitally are coming back and reading half and half.”

Professor Athanassakos also warns against “managers who create complex corporate or ownership structures, and are extremely active with mergers, acquisitions or divestitures…”.  There certainly seems to be a lot of that in the book business – the biggest example being the merger of Penguin and Random House.  Another example is Barnes and Noble, who recently split off its core bookseller business from its university bookstores.


2 - A poor company even if management is good.

These include companies with :
·         a convoluted organizational structure.
·         bad (non-transparent) accounting practices.
·         excessive leverage (debt).
·         bad business models or companies in industries in secular decline,  due to technological or customer preference changes.
The last point certainly applies to companies in the publishing and book selling industry.  I am not sure about the others – writers who have contracts with traditional publishers would probably agree with “non-transparent accounting practices”, but that has been the case for a long time, even when the industry was unchallenged.

3 - A company with a bad strategy.

His main point is worth quoting at length:
“For a company that operates in an industry without barriers to entry, a strategy that involves embarking on acquisitions hoping to achieve economies of scale, cost advantage or demand advantage, or diversify in adjacent markets that also lack barriers to entry is a sure step toward becoming a value trap.”
This seems to apply more to publishers than book retailers lately.  As noted above, the biggest merger recently was Penguin and Random House.  What were the reasons for the merger?
Bertelsmann, which owned Random House before the deal, is the controlling partner, with 53 percent to Penguin-parent Pearson’s 47 percent. Bertelsmann CEO Thomas Rabe ticked off the strategic advantages of the match: “Together, we can and will invest on a much larger scale than separately in diverse content, author development and support, the publishing talent, the entire spectrum of physical and digital book acquisitions, production, marketing, and distribution, and also in fast-growing markets of the future.”
http://lj.libraryjournal.com/2013/09/publishing/now-there-are-5/#_
Note that the CEO of Random House uses pretty well the same buzz phrases as the professor warns against.
So, we are left to wonder whether the famous words of Admiral Ackbar will be true in this case: Posted by Dale Olausen at 12:12 No comments: