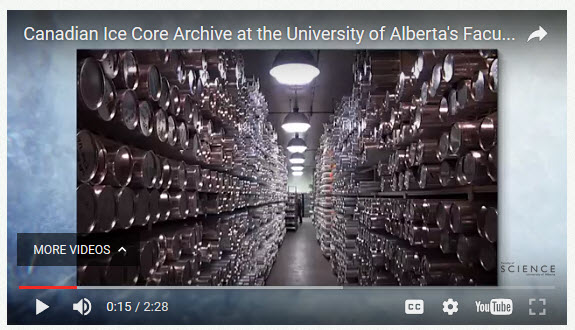 o   Ice age cycles.
o   Small scale pollution studies.
o   PH concentrations over time.
o   Isotope levels.
o   Gas concentrations.
o   Spores and other life studies.
o   All of these can be found in the ice or inferred from the ice.
o   They exchange mass with the wider environment, via accumulation of snow and ice during cold seasons, and melting during warm seasons.
o   They flow, slowly, over time, as they are a state of extremely viscous fluid.
o   They also change their size and other characteristics, due to longer cold seasons during some times (grow) or longer warms seasons at some times (retreat).
o   This can be seen in photos of glaciers flowing over the past century or so – Kurt Coffey demonstrated this with a series of photos of a glacier in New Zealand, taken over the last 50 years.
o   As a geologist might note, this leaves behind various phenomena, like eskers, drumlins, glacial till, moraines, U-shaped valleys and so forth, which help them to interpret the forces that have operated on the Earth, as well.
o   Big glaciers are actually very flat.  Therefore they have stratigraphic layering, with layers being quite horizontal.
o   The weight of ice above a given layer, will compress that layer.  That will vary with the depth of the layer.
o   Basically, that means layers will get thinner and denser as you go down.
o   Seismic analysis can also be done (similar to oil exploration), to determine the position and characteristics of layers, without actually drilling.
o   That’s because seismic work depends on velocity of sound waves changing when density changes, resulting in reflections and refractions (Snell’s law, etc.).  From these, information can be inferred about the layering.
o   Drilling cores is a lot like drilling for oil or drilling core samples in geophysical exploration, but you go through ice instead of rock.  Obviously, you have the additional problem of ensuring that the samples don’t melt. 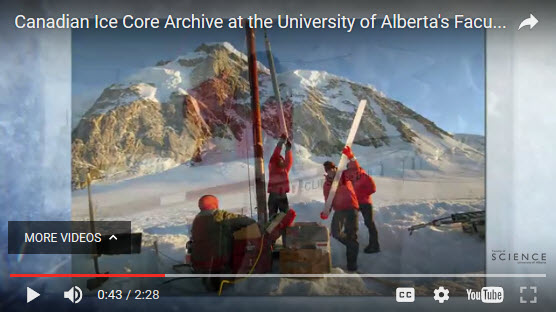 o   Snowfall levels at time of deposition.
o   Age of the ice (oldest ice cores from Antarctica are about 800 K years).
o   Count the layers (like tree rings), since they correspond to an annual cycle (not always possible, though)
o   Volcanic eruptions, that deposit very fine ash, etc. (travel through stratosphere).
o   The evidence of orbital mechanics of the Earth can be seen in ice cores, as these affect climate (precession and other wobbles of the Earth on its axis).
o   This correlation is useful for calibration (we know lots about orbital mechanics, so we can see how the tilt of the Earth (e.g. Milankovitch cycles) has affected climate and glaciation in the past, for example).
o   One way of inferring climate is from isotope concentrations (e.g. concentrations of heavy to light atoms of oxygen and hydrogen, “heavy water”, etc., which vary with temperature).
o   When ice cores are “sliced up”, different parts can be used for:
§  Gas analysis.
§  Density analysis.
§  Other physical characteristics.
§  Isotope concentrations.
§  Some is held back for later analysis, archival purposes. 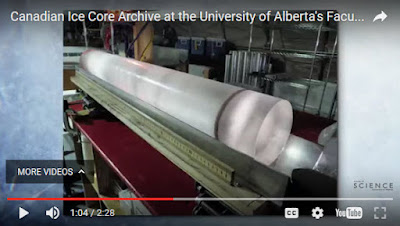 o   Borehole temperatures are also recorded, to correlate with ice characteristics at depth, such as density profiles, etc..
o   Gases are trapped at depth, as snow turns to ice, so this is an indication of the atmosphere at that time. 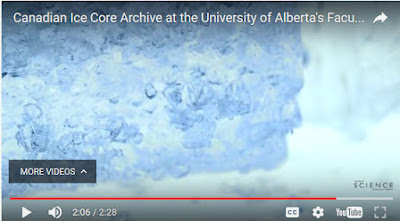 o   There is evidence of very abrupt transitions in global temperature, via ice core sample analysis.  These can be correlated with CO2 levels in the ice, among other things.
o   So, ice core analysis shows how the global temperature has varied with greenhouse gases and the Earth’s albedo over time.
o   Due to “polar amplification” of global climate change, ice cores from arctic and Antarctic locations are sensitive indicators of past climate change.
o   Dr. Cuffey noted that the idea of greenhouse warming goes back to the 19th century (Tyndall, Arrhenius).  It wasn’t really scientifically controversial until concerns about it threatened status quo economic interests.


Sources:
Notes from the talk.
https://www.ualberta.ca/science/research-and-teaching/research/ice-cores

And speaking of Science Fiction stories set in the arctic: 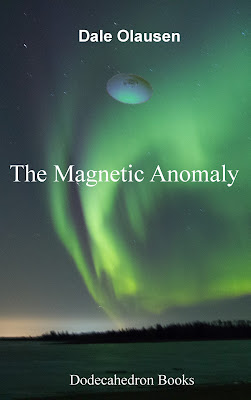 Posted by Dale Olausen at 15:07 No comments: