I am using the term “less deadly” in a certain sense, which is deaths attributed to Covid as a percentage of cases attributed to Covid.  So, it is possible that the disease could become more deadly, in terms of total deaths, while at the same time becoming less deadly in terms of the case fatality rate (CFR).  And, in fact this did happen, in some areas of the world, such as Brazil, where the CFR dropped from 6.9% to 2.4%, while the deaths per million population grew from 26 to 595. 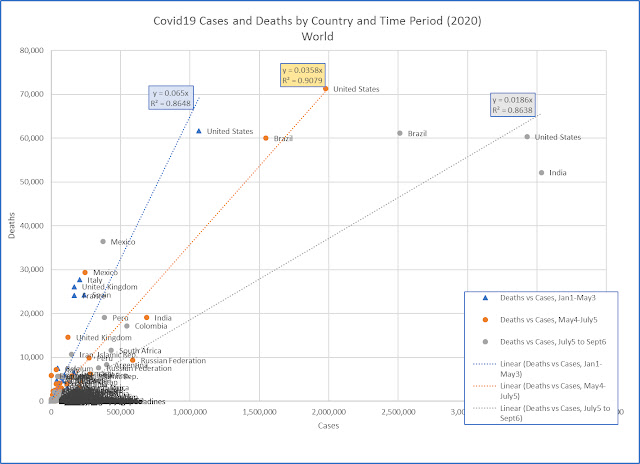 The decrease in lethality (as measured by Case Fatality Rate) can be seen in the graph abouve, which shows Cases vs Deaths for the three time periods Jan1-May3, May4-July5 and July6-Sept6.  The slopes of the regression lines give a measure of the CFR, with the country level as the unit of analysis.  The slopes are becoming less steep, from .065 in the first period, to .036 in the second and .019 om the last period.  That translate to CFRs of 6.5%, 3.6% and 1.9%.

Below is another graph of the same data, using logged variables for both cases and deaths.  The first graph has very different magnitudes for these variables, so most of the information is lost in the bottom left hand corner, which is basically a big blob of points and labels.  The logged graph helps to show the linear nature of the overall relationships, as most of the detail points are now visible (though the country labels tend to obscure some information while they also add some information). 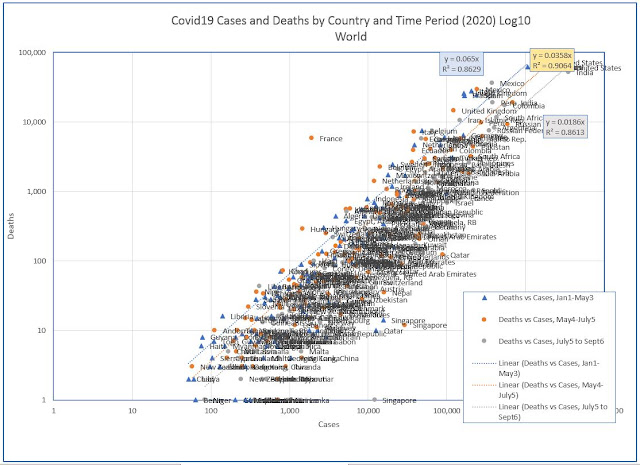 These numbers are not quite the same as those calculated by the linear regression, since those earlier numbers were based on an unweighted sample (different sizes of populations for the various countries), while the aggregate calculation takes population into account.  When a populous country has a CFR quite different from the average for the region, it will tend to dominate the aggregate method, but not the regression method.  Which method is preferable, depends on the research question.

Nonetheless, both methods lead to reasonably similar rates and the trends in decreasing case fatality rates are similar.  Given the uncertainties around the measures (e.g. accuracy in discovering, attributing and recording both cases and deaths) that’s not too bad.

It is interesting to see how the pandemic spread around the world and how the numbers varied over time in different regions.  Below are Covid case counts for Asia and Europe, on opposites of the Eurasian continent.  The pandemic started off in Asia, then quickly spread to Europe, with the case count actually being higher there during the first interval.  However, after that the case count continued to grow in Asia (largely in India), while it stabilized in Europe. 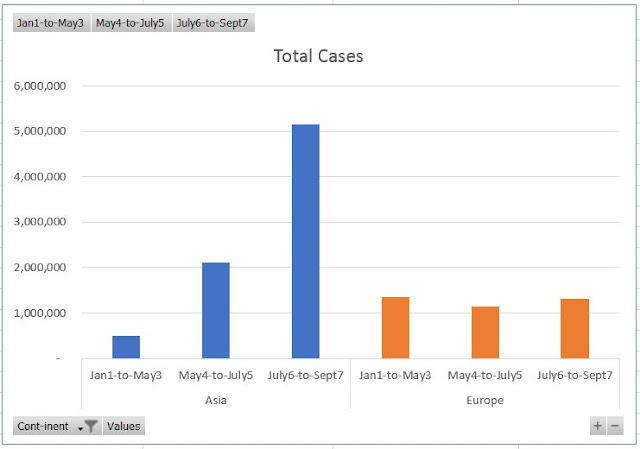 The death rates were much different in the two regions, though they eventually stabalized at about the same rate.  It is tempting to speculate that Europe might have had a more virulent, mutated strain at the beginning of the pandemic, but the virus in both regions might have evolved to a similarly less benign state.

Another interesting comparison is in the New World, i.e. North America and South America.  In this case, North America was hit fairly quickly, while South America didn’t have many cases until the second interval, when it caught up to North America, and then the two continents were remarkably similar in case count.  The majority of cases were in the largest countries on the two continents, U.S. (north) and Brazil (south).  Note that I kept the scale the same as it was for Asia/Europe, for easy visual comparison between the graphs. 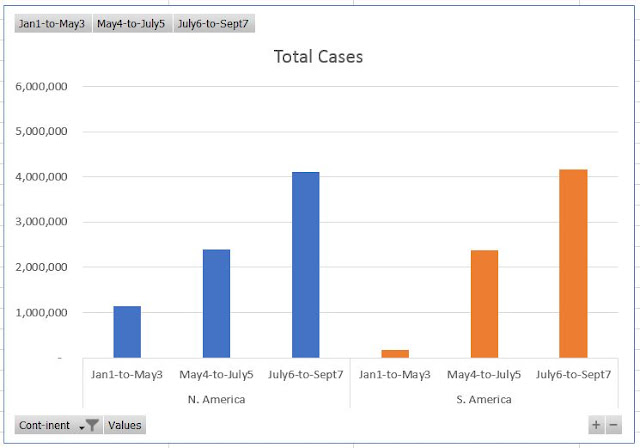 The death rates were somewhat different in the two regions, with South America having lower rates in the first two intervals, but higher rates in the latest interval.  Generally speaking, the virus took longer to reach the southern hemisphere and lower latitudes, but once it did, the fact that it was winter there probably made its effects worse than it was in the northern hemisphere summer.

The last continental comparison is between Australasia and Africa.  Though far apart geographically, they share the characteristic of being relatively isolated, either by geography or economic integration in the world economy.  Low case counts aren’t unexpected for Australasia, as the population of the region is low.  Africa, however has low case counts compared to the other large, populated continents, likely because of its being less economically connected to the major pandemic regions.  Less accurate record keeping and a relatively young population probably also played a role. 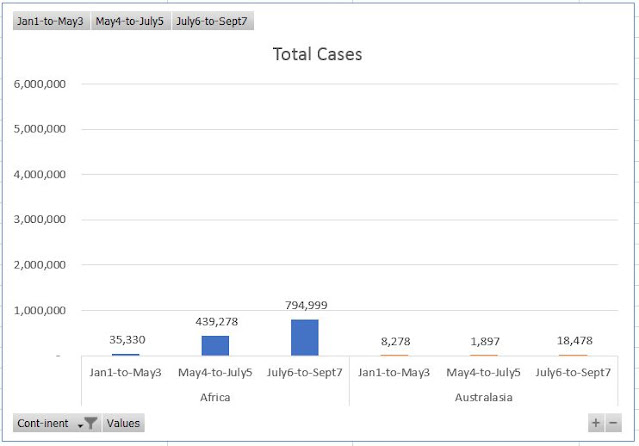 The falling death rates seen in other regions is less prominent in these regions.  Again, this seems likely to be attributable to the fact that the virus’s effects are worse in the winter months, and it was winter in these southern continents during much of the latter two intervals (though only partially in the case of Africa, as it is in both the Northern and Southern hemispheres). 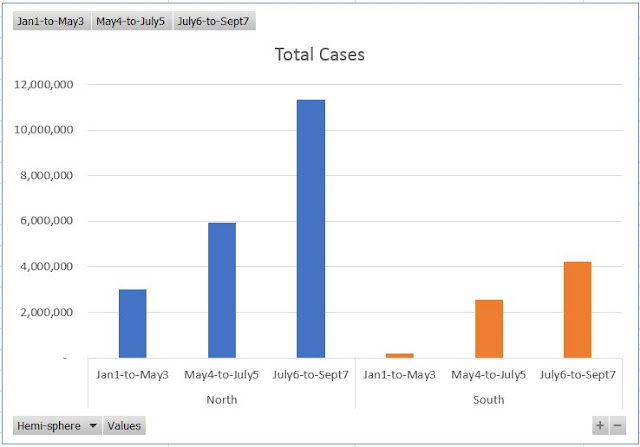 Case fatality rates were higher in the north than the south, in the first time interval, but by the last interval that had been reversed.  Perhaps this is an indication that the virus was already evolving into a less deadly form by the time it hit the south, but its progress in that regard was slowed by smaller populations in the south, by the most recent time interval.

Lastly, the graph below gives a look at how the pandemic progressed by latitude, based on the latitude of a country’s capital city (High=40+, Mid=20 to 40, Low =0 to 20).  The high latitudes fared worst at the start of the pandemic, but didn’t really change much after that, in terms of total cases.  Mid and low latitudes, on the other hand, increased in the numbers of new cases in each of the later intervals.  The low latitude region’s increase appears to be linear, while the mid-latitude’s increase has a hint of an exponential increase. 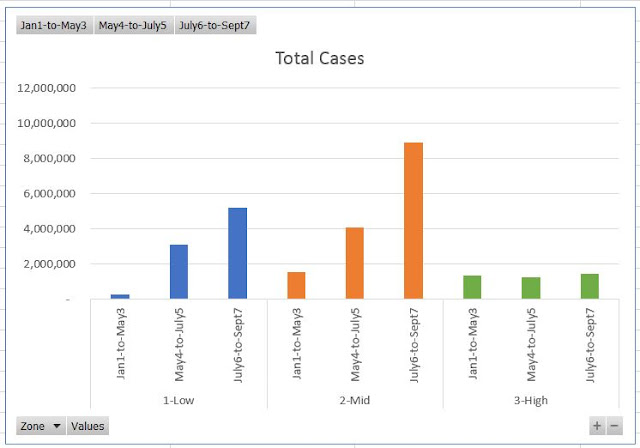 Case fatality rates were much higher in the high latitudes at the start of the pandemic than in the other regions.  However, by the end, rates there were lowest.  Mid latitudes also quite a subsantial drop in Covid death rates, while the drop in low latitudes was fairly muted.

So here’s how the Covid-19 pandemic has gone so far.

·       Roughly speaking, the novel Corona Virus has spread around the world, from its beginnings in Asia, quickly to Europe, then to North America, then to the countries of the Southern Hemisphere.

·       Though the global numbers of new cases have climbed from period to period (approximately doubling), this has been approximately linear, rather than the feared rapid exponential increase.

·       The case fatality rate from Covid-19 has fallen over this time period, from around 6%-7% in the first interval, to only about 2% by the third interval.

·       Therefore, the total number of deaths worldwide has increased but not uncontrollably.

So, why has the fatality rate gone down?  There are several theories:

We will continue to watch, modifiy behaviours and strategies appropriatily (hopefully), research and develop greater understanding.

And, here’s a more pleasant travel story than anticipating the worldwide journey of a virus.

A Drive Across Newfoundland 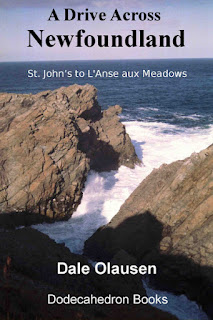 The city of St. John’s is one of Canada’s most unique urban areas, with a population that maintains many old traditions and cultural aspects of the British Isles. That’s true of the rest of the province, as well, where the people are friendly and inclined to chat amiably with visitors. Plus, they talk with amusing accents and party hard, so what’s not to like?

This account focusses on a two-week road trip in October 2007, from St. John’s in the southeast, to L’Anse aux Meadows in the far northwest, the only known Viking settlement in North America. It also features a day hike visit to The Tablelands, a remarkable and majestic geological feature. Even those who don’t normally consider themselves very interested in geology will find themselves awe-struck by these other-worldly landscapes.

A Ride on the Kettle Valley Rail Trail: A Biking Journal Kindle Edition

The Kettle Valley Rail Trail is one of the longest and most scenic biking and hiking trails in Canada. It covers a good stretch of the south-central interior of British Columbia, about 600 kilometers of scenic countryside. British Columbia is one of the most beautiful areas of Canada, which is itself a beautiful country, ideal for those who appreciate natural splendour and achievable adventure in the great outdoors. 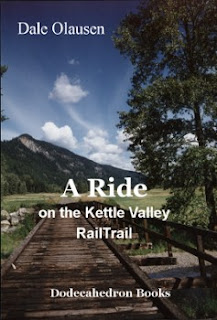 After reading this account, you should have a good sense of whether the trail is right for you. If you do decide to ride the trail, it will be an experience you will never forget.

On the Road with Bronco Billy 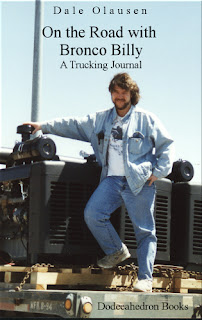 Spring is on us now, and that brings on thoughts of ROAD TRIP.  Sure, it is still a bit early, but you can still start making plans for your next road trip with help of “On the Road with Bronco Billy”.  Sit back and go on a ten day trucking trip in a big rig, through western North America, from Alberta to Texas, and back again.  Explore the countryside, learn some trucking lingo, and observe the shifting cultural norms across this great continent.  Then, come spring, try it out for yourself.

Posted by Dale Olausen at 21:14 No comments: