“A Christmas Carol” and “The Gift of the Magi” are great, but sometimes the Christmas spirit needs to be refreshed by something a little more up-to-date.  Christmas short stories by Helena Puumala are just the ticket to recapture Christmas magic, for children and adults.

“A Christmas Miracle at the Lake” will be free on Amazon from Dec 22 to Dec 26.  It's a short story of about 10,000 words, concerning a troubled family and a marvelous Christmas visit, by a modern Christmas ghost, who has an important (and hard-earned) message about tolerance and understanding: 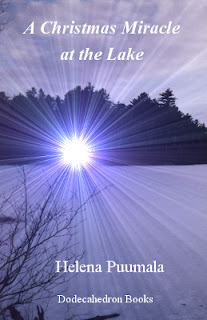 Posted by Dale Olausen at 16:22 No comments:

And there's the Dodecahedron snowman, with a friend.  Isn't that great. 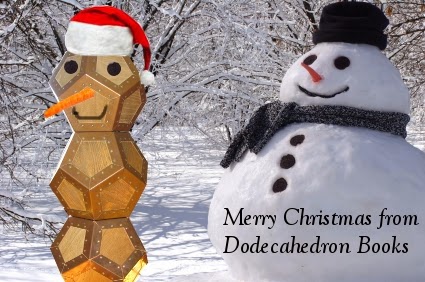 Posted by Dale Olausen at 15:59 No comments:

Email ThisBlogThis!Share to TwitterShare to FacebookShare to Pinterest
Labels: A2 - Kati of Terra Series, Christmas

Miranda and the Christmas Elf


Miranda and the Christmas Elf - Free on Amazon Dec 22-26

We have a beautiful new cover for Helena Puumala's children's Christmas story, “Miranda and the Christmas Elf”, done by artist Alexandria Gardener (note: though it is billed as a children's story, adults can enjoy it too, especially if they read it to a young one at Christmas). 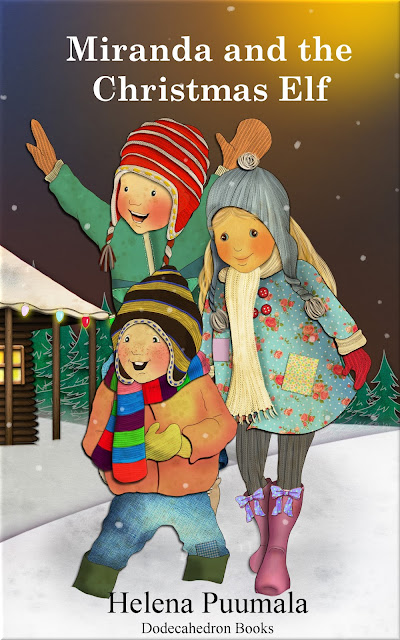 The cover depicts the children discovering the magical (but curmudgeonly) Christmas Elf Lufton, who has been sent by the Magical Authorities to assist the little girl Miranda, to overcome the various obstacles in her young life.

The story is set in the Christmas splendor of a Northern Ontario rural lakeside community.  It features Helena Puumala's wonderful way with emotionally rich, yet optimistic family drama.

The story is about 9000 words, and costs only 99 cents U.S. (or equivalent, in other national currencies), a nice Kindle stocking stuffer for a child (or an adult with a child).  Note that it is free over the Christmas week - a Christmas gift to our readers.


The cover is by artist Alexandria Nike Gardener, who has also done children’s’ book illustrations for several titles, as well as other amazing artwork.  Her web page is linked below.  Check out "Maddie Goes to London".

Posted by Dale Olausen at 15:15 No comments:

To Defeat the Wizard’s Curse – Nathan’s Adventure in the Other-Other Land, Book 2


To Defeat the Wizard’s Curse – Nathan’s Adventure in the Other-Other Land, Book 2 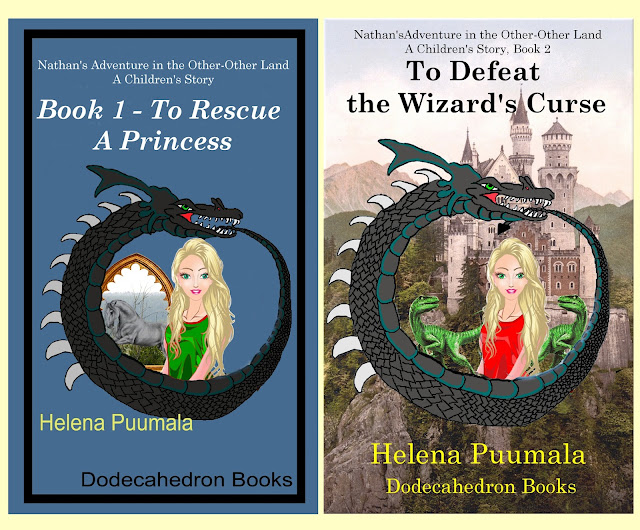 Posted by Dale Olausen at 16:28 No comments:

To Rescue a Princess – Nathan’s Adventure in the Other-Other Land, Book 1 (retitled and with a new cover)

To Rescue a Princess – Nathan’s Adventure in the Other-Other Land, Book 1 (retitled and with a new cover)

Helena Puumala has recently finished work on a second book in the children’s fantasy series, Nathan’s Adventure in the Other-Other Land, following the adventures of Nathan and his friends, as they travel to the Other-Other Land, through the magic mirror.
In Book 1, Nathan helps Prince Roland to rescue his sister, Princess Pepper, from the clutches of the Black Dragon, who is in league with the Terrible Bing – both wish to overthrow the Kingdom of the Other-Other Land.  Nathan and Prince Roland must undergo many tests and perils, in their mission to save the feisty Princess Pepper.
With a new chapter of the story in the works, we have given the first book a new title, more in keeping with the series nature of the story.  The new title is “To Rescue a Princess”, which is of course very descriptive of the main story arc of the first book of the series. 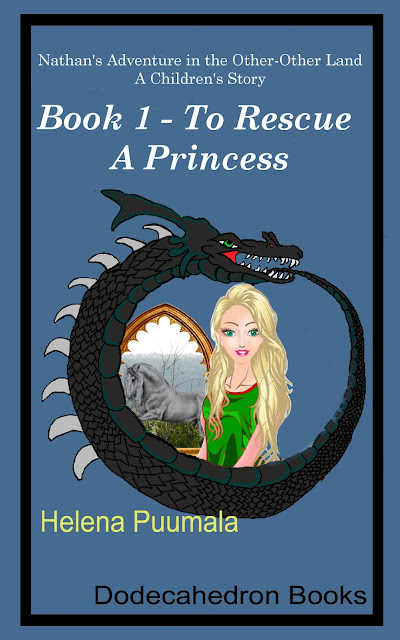 Here’s the summary for Book 1:

Young Nathan discovers some new playmates in the Other-Other Land, a wonderful, magical world that exists behind the Magic Mirror. But disaster strikes, and Nathan must help Prince Roland rescue his sister, the Princess Pepper, from the clutches of the Black Flying Dragon of the Dark Mountain.

But the rescue will not be easy. There are said to be many fearsome obstacles along the way, including treacherous quicksand swamps, complete with monsters, poisonous mushrooms that can walk and jump and that hate people, and ferocious bands of roaming tigers. And then, there is the dragon and his minions to contend with.

Will Nathan and Roland (with the aid of their trusty ponies) outwit their enemies and overcome the many dangers of the journey to the Dark Mountain? Can they save the feisty Princess Pepper? Come along for the ride and find out for yourself.

The story is about 10,000 words, a suitable length for an elementary grade child to read in an hour or two. It can also be read to a younger child over a few bed-times. There are 15 short chapters with 15 original hand-drawn pictures to go along with them. Note that the writing includes some humorous passages that parents and older readers will enjoy.

The book is available from Amazon in both e-book and print versions.

And here's a preview of Book 2, soon to be published:

To Defeat a Curse – Nathan’s Adventure in the Other-Other Land Book 2
Book 2 continues the adventures of Nathan and his friends, with much of the focus now on Princess Pepper, as she enlists the help of Nathan and his cousins, to overcome a  curse which has been put on the land.  This spell has resulted in a terrible drought throughout the country, which is slowly killing the land and its people.  The Princess and her companions must also overcome many perils in their quest to overcome the Wizard’s Curse, including the emotionally jarring prospect of re-uniting with Pepper’s mother, who seemed to have abandoned her children at an early age.  That book will be published within the next week or two, well before Christmas (Cover and Title are still under consideration). 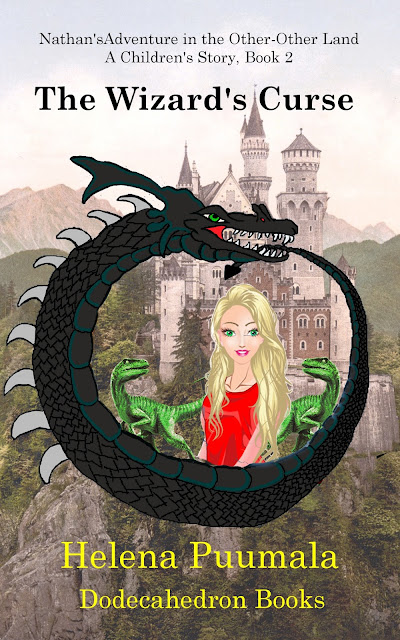 Posted by Dale Olausen at 16:25 No comments: