What’s Fueling our Future? – A Panel Discussion at the University of Alberta

What’s Fueling our Future? – A Panel Discussion at the University of Alberta

Some weeks back (April 18, 2016),  there was a panel discussion at the University of Alberta, entitled “What’s Fueling our Future?”.   It is part of the Mindshare Series, conversations on “issues that really matter”, and was put on by Universities Canada (formerly known as AUCC).

The panel consisted of:

·        Imre Szeman, University of Alberta, CRC in Cultural Studies with the Petrocultures group.

·        Andreea Strachinescu, with the Directorate General for Energy, European Commission.

The overall topic of the conversation related to Energy, especially the transition from fossil fuels to renewables.  This will, of course, have an impact on the entire globe.  Those impacts will span many perspectives, from technology, science, environment, politics and sociology.

The province of Alberta, Canada is at the nexus of this, as fossil fuel production plays a major role in the province’s economy.  The University of Alberta is a major player in energy research, rates as one of the top ten research universities in energy matters in the world.  So, the U of A is a good location for such a talk.

Below is my summary of the discussion.  I hope it captures the essence of the talk and accurately reflects the speaker's viewpoints.

Speaker 1 - Imre Szeman: From Petroculture to Other Cultures, On the Social Transitions Connected to Energy Transition

Professor Szeman, a Canada Research Chair in Cultural Studies,  is part of group known as Petrocultures, at the University of Alberta, who look at the sociological and cultural aspects of energy.  His talk therefore was a fairly high level look, spanning technical, political, social, scientific and environmental aspects of the question. 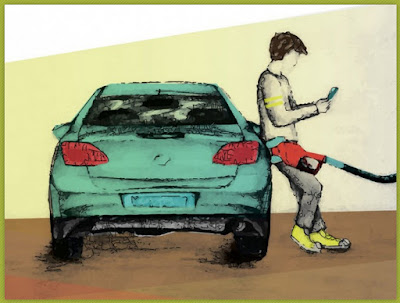 So, what is a Petroculture?  Basically, it’s us.  We (especially Canada) are societies organized around fossil fuels.  Most countries are Petrocultures, to one degree or another.  Being a Petroculture relates to physical and environmental issues, but it also relates to the mental habits and attitudes that we have, due to being a petroleum based society.

The professor noted that we are fossil fuels “all the way down”.  Our values are deeply entwined with fossil fuel use, and it has been said that “our freedoms are energy intensive” (Dipesh Cherbratarty).

Energy is part of our “social unconscious”, and that is currently dominated by fossil fuels.  Eventually, we will have to pivot away from this (petroleum is finite, and global warming adds to the urgency), but there will be conflicts over fossil fuel along the way.  Fossil fuels have allowed much bigger populations than previously attainable, and have opened up many options that were not realizable in the past (e.g. easy transportation, commuting as a way of life, intercontinental tourism).  Alternatives are often recognized at the input level (e.g. electric cars vs internal combustion engines), but we will likely have to go much deeper than that – many behaviours will have to change radically (e.g. much less commuting, rather than just transforming the way we commute). 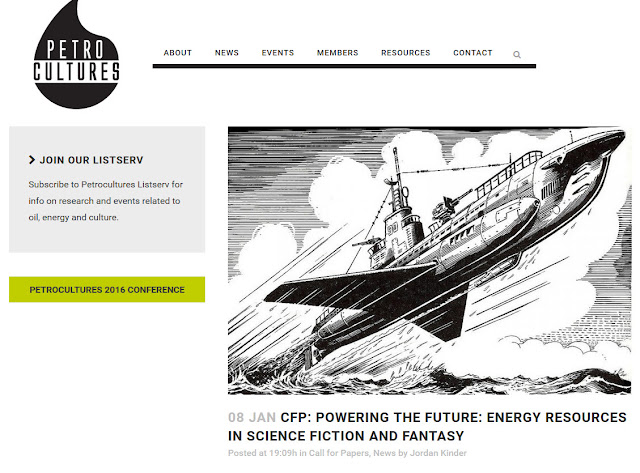 Fundamentally, he pointed out that in the future, moving away from fossil fuels will imply using less energy overall.  But our deeply ingrained mental habits associate physical and psychological well-being with using lots of energy, so those fundamental mental habits will have to shift.  That mental shift will be hugely contested by the status quo, both the economic forces that benefit from the status quo, but also our own ingrained habits will resist the shift away from Petroculture.

Andreea Strachinescu talked about policies and developments in Europe, regarding their energy transition.  Europe has ambitious targets to reduce greenhouse gases, transition to renewables, and integrate their energy systems.

To begin with, she outlined some major challenges:

o   There are historical and traditional economic linkages to consider.
o   There is a lack of existing energy corridors, for an integrated system.
o   Only about 10% of the electricity network is integrated within the European grid.

o   Security of supply (i.e. so that non-European countries can’t cut off needed energy imports).
o   Sustainability (so that costs are predictable and supplies are reliable).
o   Competitiveness (so that costs don’t make European economies uncompetitive in comparison with other regions of the world.

o   Reducing the cost of renewables.
o   Integrating them into the system effectively.
o   Changing behaviours, to increase efficiency.


Speaker 3 – Junjie Zhang: Economy, Energy and the Environment - the Case of China

Jungie Zhang is an associate professor, at the School of Global Policy and Strategy, University of California, San Diego.  He specializes in economic modelling, that incorporates micro behaviour at the systems level.

Professor Zhang’s discussion focussed on China, a view from the outside, as there is considerable scepticism about official figures from China.  Here are the highlights: 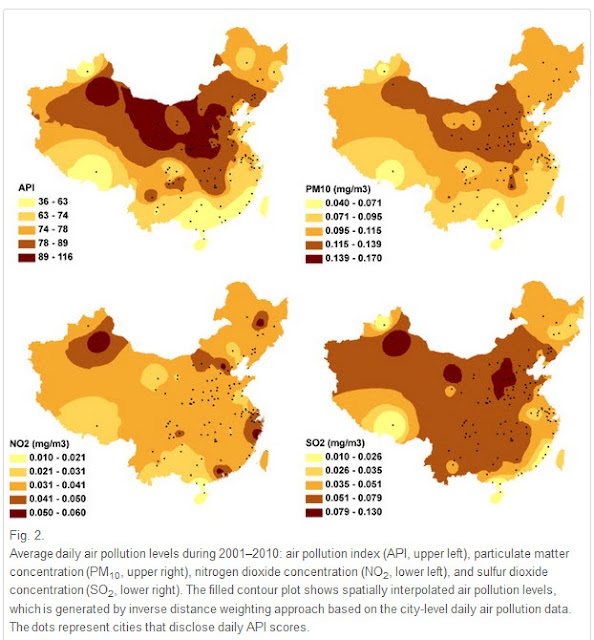 o   Will China maintain the level of growth it has seen in the recent past?
o   Can you trust official figures?


Speaker 4 –Thom Mason: Science and Technology for the Energy Challenge, a U.S. Perspective

Thom Mason describes himself as a “technological optimist”, but recognizes that there is a lot of work to do, in regards to the necessary transition away from fossil fuels.  He notes that the human race has solved huge problems in the past via technological breakthroughs, though, using the invention of nitrogen fixing as an example.  That staved off a food supply crisis, which appeared to be inevitable in the early 20th century. 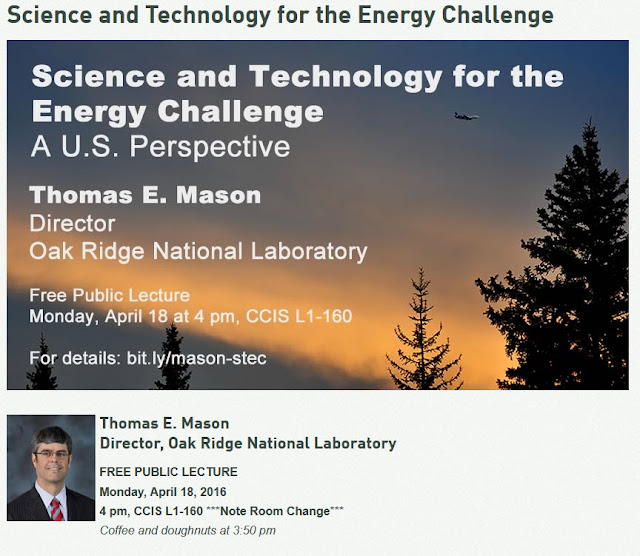 Below is his take on the current situation.

Constraints on the energy transition: 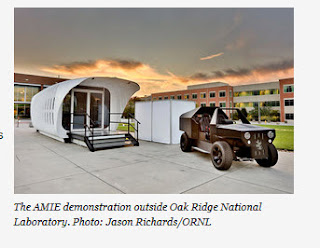 The four speakers then took questions and had a bit of a round table discussion.  It was widely agreed that the problem is much more than technical in nature - social and behavioural changes have to be a large part of the solution.  It was noted that attitudes can change - for example, driving a hummer is no longer a status symbol in California.  Hybrids and Teslas have taken the place of the hummer.  It’s a small example of how social change can help address climate change.
Links/Sources

A Sci Fi book with a Global Warming Aspect

And here’s a science fiction novel which includes plenty of action on a planet that has been devastated by a global warming episode, several centuries before the story starts (“the drowned planet”).  It’s good to occasionally take a break from real science, and read some science fiction :) 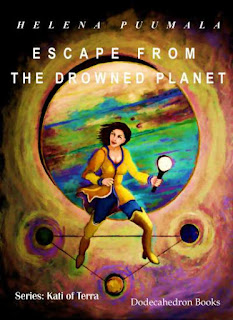 Posted by Dale Olausen at 16:44 No comments:

The Witches' Stones Book 3 - Revenge of the Catspaw, now on Amazon

The Witches' Stones Book 3 - Revenge of the Catspaw, now on Amazon

The third and final volume of The Witches' Stones sage, Revenge of the Catspaw,  is now out on Amazon.  In fact, the entire series is now available. 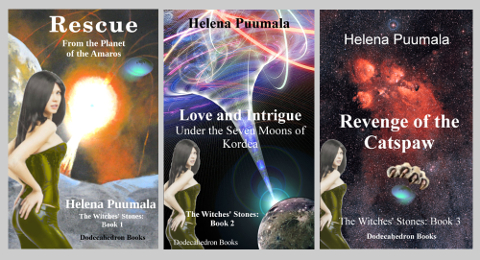 Sarah has taken refuge on the planet of Kordea, where she is also learning how to control her psychic abilities, through the tutelage of the Witches of Kordea.  Coryn Leigh has now taken up the position of Confederation diplomat to the Kordeans, but he is also charged with keeping the Mackenzie girl safe at all costs.  During their time on the planet, an attraction between them grows, though they try to deny it, to themselves and each other.

But The Organization has plans of its own, including threatening the destruction of the planet Kordea, via destabalizing the orbit of Lina, one of its many moons.  The Organization proves that its threats are in deadly earnest, so, ultimately Sarah, Coryn and the Witches of Kordea must take the fight to the enemy.  Thus is borne a dangerous mission, to  a planet where their foe has based the weapon that threatens Kordea, and ultimately, the balance of power throughout the galaxy.  Sarah and Coryn agree that the machine must be destroyed, even at the possible cost of their own lives and growing love.


The Witches' Stones, Book 3 - Revenge of the Catspaw

Sarah and Coryn have become married, under the traditions of the Witches of Kordea.  But the marriage is performed by the Eldest of the most important coven, a rare honor, that comes with a blessing and a curse.  The slow working out of this blessing and curse forms the backdrop to the story.

The Globe and Mail Report, CBC news and Financial Post all reported on May 12/13 2016, that Paul Godfrey, head of Postmedia wants government assistance.  He made his pitch at a parliamentary committee meeting.

He warned that without such moves, many local news outlets will be shuttered within the next three years.  From that, we can assume he means that Postmedia needs government money fast, so that Goldentree and his other debtors don’t pull the plug on them.  Goldentree must be putting on a lot of pressure, for Godfrey to go cap in hand to the Liberal government.  Three years is probably a very optimistic time frame.

Godfrey noted that Postmedia is still “Canadian controlled”, even if U.S. based Goldentree Asset Manager holds its very existence in its hands, via the huge debt load that Postmedia has incurred over the past decade or so.

What can we learn from this?  Just the age old lesson, that people’s philosophical distaste for bailouts vanishes, when it is them that need the bailout.  Which is understandable, though the hypocrisy can be a bit tough to take.  Perhaps, though, Godfrey might consider a personal pay cut, to show his willingness to pitch in.  It’s a pity that nobody on the committee brought that possibility up. 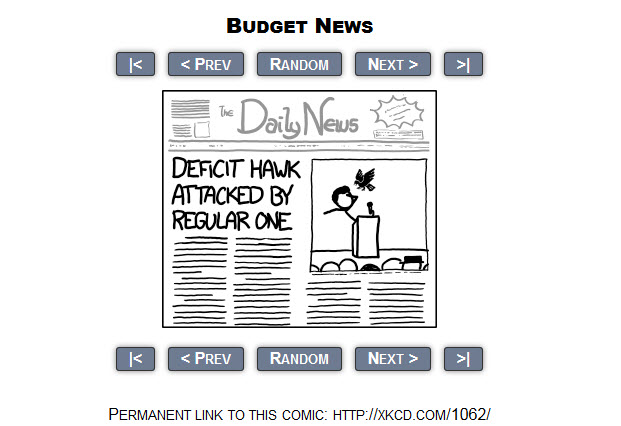 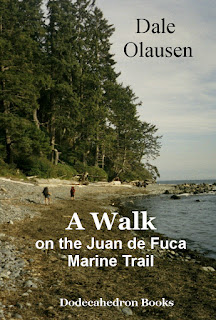 Posted by Dale Olausen at 20:03 No comments: