“Up There Came A Flower ”, a Family Story, free on Amazon

“Up There Came A Flower ”, a Family Story, free on Amazon


This Spring Equinox week (March 20-24, 2018), we are featuring a free family story, about the difficult challenges that young women can face, choosing between career aspirations and children and family.  It’s by Science Fiction and Romance writer Helena Puumala, so it has that blend of realism and warm emotion that is one of her specialties.  Sometimes, advice on the matter can come from unexpected sources, as in this story. 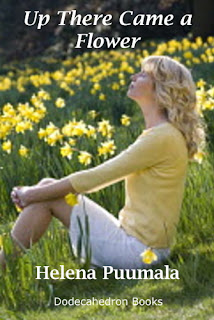 Posted by Dale Olausen at 07:17 No comments:

“The Great American Solar Eclipse of 2017 – On the Road through Alberta, Montana and Idaho ”, a Travel Story, free on Amazon

“The Great American Solar Eclipse of 2017 – On the Road through Alberta, Montana and Idaho ”, a Travel Story, free on Amazon

This Spring Equinox week (March 20-24, 2018), we are featuring a free travel story, about a trip to see the solar eclipse last summer, in Idaho Falls U.S.A..  Since winter is ending and the sun is returning to its full glory, it seems appropriate to give it center stage.
The trip involved some touring in the mountain parks of Alberta, Canada, followed by a journey through the rugged coulees  and beautiful mountains of Montana and Idaho.  It culminated with the spectacular total solar eclipse of August 21, 2017 as seen in totality from the scenic small city of Idaho Falls.  The story also includes some scientific and historical background about the eclipse phenomenon in general.
The story is about 12000 words (about an hour reading time at typical reading speeds) and features many photographs.  It is also on Kindle Unlimited, and after the free promotion week will cost $0.99 on Amazon. 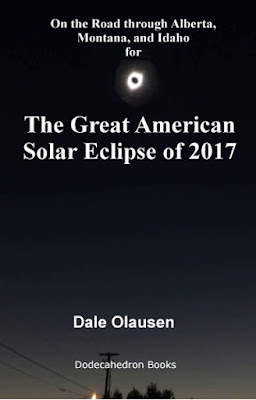 Posted by Dale Olausen at 05:22 No comments:

Anyone who studies even a bit of advanced mathematics soon discovers the fact that the number pi (3.14159…) shows up all over the place.  Sometimes that seems fairly easy to understand - e.g. the unit circle is fundamental to trigonometry, so it seems natural that pi should show up there.  Other times, it seems more mysterious – for example, number theory is concerned with prime numbers, which are integers, so why does pi show up so often in that subject?  But it does.

Anyway, here’s an example from a book that I own, called “Recreations in the Theory of Numbers”:

If you take any two random numbers and compare them, the probability that they are relatively prime turns out to be = 6/pi**2.

I won’t bother with a proof of this claim – no doubt you can find a reference on wiki or some other source.  But I did think it would be interesting to test it experimentally, so to speak.


This was a lunch hour exercise at work, so I relied on an Excel hack.  No doubt a more elegant method could work better and would be more robust.  Here’s the method:

·       Yes, I know this model could have been made a lot more efficient (e.g. no point testing all the numbers between 1 and 100), but I just wanted to get some quick results for Pi Day, so I didn’t slave over the details.

Below are the graphs of the results: 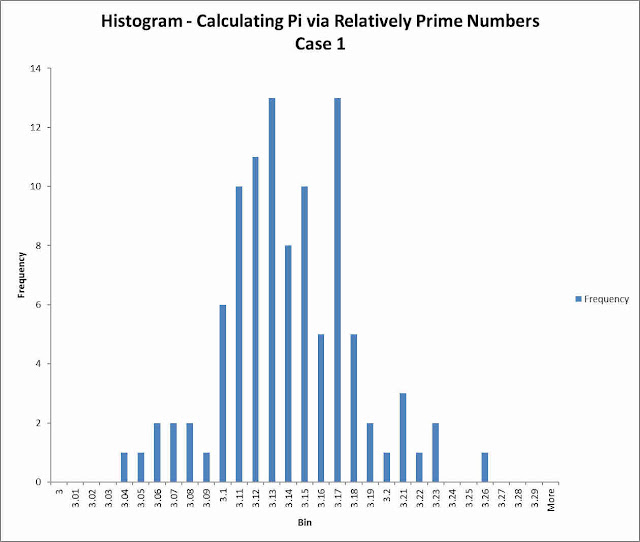 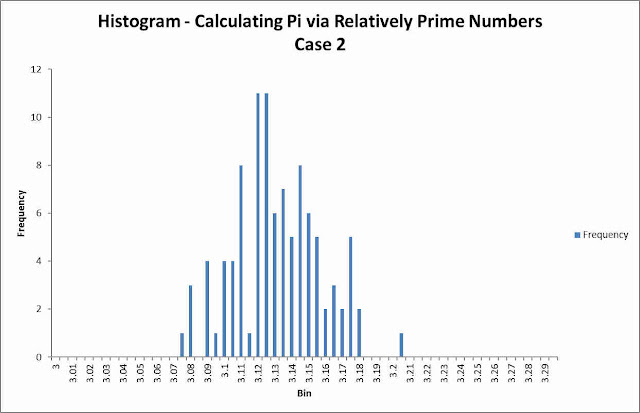 As you can see, the histogram is tighter in case 2, reflecting the fact that there were twice as many pairwise comparisons for each run.

It is interesting that both runs underestimated the true value of pi, by about 0.3% in one case and about 0.5% in the other case.  I don’t know if that is just a fluke, or if there is some subtle bug, either in my implementation or in Excel’s random number generator.  I have often had my doubts about the latter.

At any rate, it seems clear that this method converges slowly to the true value of pi.  In the days before computers, it would have been quite a challenge to generate the data.  Now, though, one could run a test like this a few million times (e.g. in Python or SPSS) and probably get quite a reasonable estimate for pi.  But it is interesting that pi can be estimated from a method that has no geometrical basis, at all.

And here’s a picture of one of my wife’s (and SF writer) Pi Day pies – pumpkin pie, which is scrumptious with whipped cream and a great favorite of my data warehouse and data science colleagues at the office. 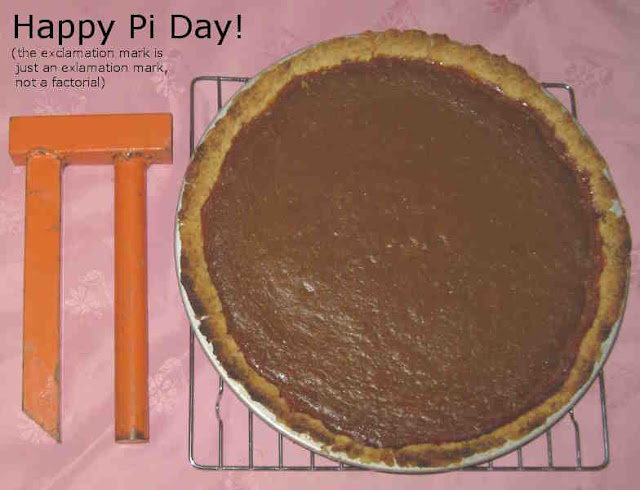 Sources:
Recreations in the Theory of Numbers, Albert Beiler, Dover

So, now that you have done some math, you should read a science fiction book, or even better, a whole series.  Book 1 of the Witches’ Stones series even includes a reference to pi.: 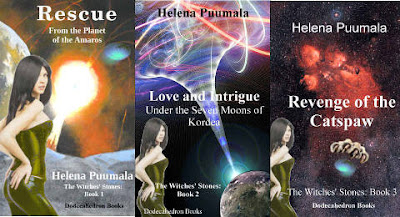 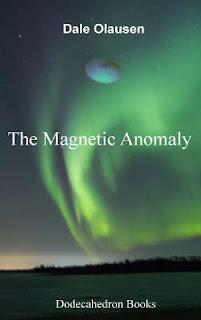 The Zoo Hypothesis or The News of the World: A Science Fiction Story

In the field known as Astrobiology, there is a research program called SETI, The Search for Extraterrestrial Intelligence. At the heart of SETI, there is a mystery known as The Great Silence, or The Fermi Paradox, named after the famous physicist Enrico Fermi. Essentially, he asked “If they exist, where are they?”.

Some quite cogent arguments maintain that if there was extraterrestrial intelligence, they should have visited the Earth by now. This story, a bit tongue in cheek, gives a fictional account of one explanation for The Great Silence, known as The Zoo Hypothesis. Are we a protected species, in a Cosmic Zoo? If so, how did this come about? Read on, for one possible solution to The Fermi Paradox.

The short story is about 6300 words, or about half an hour at typical reading speeds. 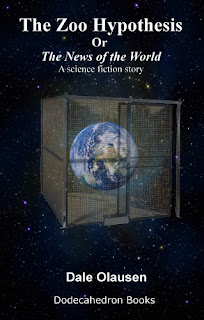 Posted by Dale Olausen at 20:23 No comments: